Effingham and Our Lady of Sorrows History

“Effingham Als Yffingham so called from one Aeffing (i.e. son of Yffe) a Saxon to whom (in all probability) it was given by Ella, the first King of the South Saxons about the year 493 AD or after and had here his Ham, i.e. house or habitation.”.  These words are taken from a small pocket memorandum book used by successive Vicars of Effingham in the late 17th and early 18th centuries, including a scholar and historian, the Rev John Miller.

Before coming to Effingham in 1696, Mr. Miller was Chaplain to the King’s forces at New York for three years and he has left notes about, among other things, the building of Forts Niagara in 1687 and Susquannah, the character of the Iroquois Indians, the settlements of the State of Georgia in 1663 together with descriptions of the lands around Lakes Erie and Huron.
Documentary evidence of Effingham comes from the Venerable Bede in the 7th century who records that Erconwald, Bishop of London in 674 AD had founded a monastery at Ceortesie (Chertsey) by the Thames and that Bishop Frithwold, Viceroy of Surrey had granted to the Abbey 20 dwellings in “Bocham cum Effingham”.  King Athelstan confirmed this grant in 933 AD and by subsequent Kings of England up to and including King Henry VIII.  After the Norman conquest the Domesday Survey taken in 1086 sets out the various holders of land in Effingham, including the Abbey of Chertsey and Richard of Tonbridge.  It also includes the Manor of Dritham. (Dirtham Lane, Effingham keeps a trace of this name).  These holding were known later as:

So they remained until the suppression of the Monasteries by Henry VIII in 1538.
The land formerly belonging to Chertsey Abbey was granted by Edward VI  in 1550 to Lord William Howard, created Lord Howard of Effingham by Queen Mary in 1555.  From him it passed to his heir Charles who distinguished himself as Commander-in-Chief against the Spanish Armada.  It is interesting to record that in the year of the bicentenary of American Independence, the 5th Baron of Effingham was Governor of Virginia 1685-1688.  Effingham, Illinois is named after his great grandson, Thomas Howard 3rd Earl of Effingham, whose sword is displayed at the reconstructed capital of Colonial Williamsburg in Virginia, with the following inscription:  “The Regimental sword of Thomas Howard, Earl of Effingham, who refused to draw it in the attempt of his country to subjugate America in the year 1776.”.  Some small townships and hamlets in New Hampshire USA bear the name of Effingham through the relationship by marriage of the first Governor, Benning Wentworth, and the Earls of Effingham.

Roman Catholic Church of Our Lady of Sorrows

The style is ‘Early English’ and the design, prepared by Mr Edward Bomer, closely follows the plan of a pre-Reformation Church.  The advisory architect was Mr C Hinsley and the builders were Messrs. Gaze of Walton and Kingston.  The Altar Canopy, now removed, was designed by Mr Bernard McAdam of Putney in the Italianesque style.

Begun in 1912, the Church was opened and consecrated by the Bishop of Southwark, Archbishop Amigo, on 8th October 1913.  The cost of the Church and the priest’s house was met in full by George Pauling, Railway Engineer, who made his name and fortune in South Africa in connection with the expansion of that region under Cecil Rhodes.  At the latter’s request, George Pauling accepted the portfolio of Mines and Public Works for Rhodesia, holding office from 1894-1896.  George Pauling came to reside permanently at The Lodge, Effingham and had the privilege of a Private Oratory in his house.  The two dozen local Catholics worshipped there on Sundays and this Chapel became the nucleus of the present Roman Catholic parish.

George Pauling died of pneumonia in 1918 aged 64 and his body was laid to rest in the cemetery beside the Church he had founded.  Twenty years later his wife Lola was buried in the same grave.

In 1919 the Pieta in Carrera marble was erected to the right of the Altar rails by the Pauling staff in memory of the founder.  The Baptismal Font is pre-Reformation, originally from an Oxfordshire church but discovered during the First World War in a house at Henley-on-Thames, which had been requisitioned by the Admiralty. 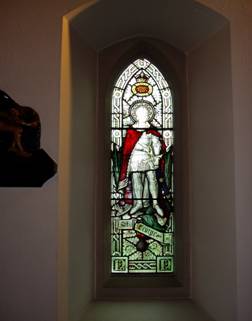 In 1976 alterations were made to the Sanctuary to enable the Liturgical Services to be conducted in accordance with the rules laid down by the Second Vatican Council.  The Altar Canopy with its  marble pillars was removed to make room for re-positioning the existing High Altar to the front of the Sanctuary to enable the Celebrant to face the congregation when celebrating the Mass and other Services.   The Tabernacle now rests on a six foot long Portland stone which is, in turn, supported by a single leg of stone taken from the base of the Pieta.  The Sanctuary is now in keeping with the ‘Early English’ design of the Church.  New lighting and heating systems were installed and the Church was redecorated.

The Baptismal Register commenced on 6th December 1913 and the first entry was that of Walter Nicholls, a convert to Catholicism, and the baptism was conditional.  The first marriage took place in October 1917 when Lieutenant Philip Ryk Myburgh of Uckfield married Marjorie Esther Henderson.  The Confirmation Register starts on 11th Mary 1915 when Archbishop Amigo confirmed William Armstrong, Harold Everett, John Kelly, Walter Nicholls, Dolores Pauling and Emma Maria Delgado.  The first burial in the cemetery was that of Helen Christina Wray on 27th September 1915.

​The centenary of the church was celebrated in 2013.

This church stood on the corner of East Lane and Northcote Road, West Horsley. The land was purchased and the church designed and built in the mid-1930s by Mr Harry Stuart Goodhart-Rendell. He then donated it all to Our Lady of Sorrows Parish, Effingham. He was an architect and convert who owned Hatchlands, Clandon, and lived there for part of the year. A further donation of £450  came from Fr Prince  who appears to have received this sum as a legacy. The Church was opened on 30th April 1938 by Bishop Brown and was served from Our Lady of Sorrows, Effingham. The church was closed in 2007.

The new parish hall at Effingham, was opened by Bishop Richard Moth on 1st October 2015 and is called the St Alphege Hall.
In 2012 the parish of Our Lady of Sorrows was conjoined with the Church of the Holy Spirit, Fetcham to form the new Catholic Parish of Effingham and Fetcham. The first parish priest of the new parish was Fr John Inglis.