The Centenary of the Church’s Consecration on 8th October 1913 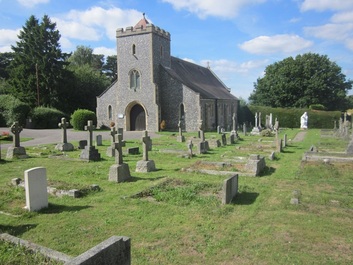 
George Pauling was born in 1854 to Richard Pauling. He had three siblings, brother Harry [Henry Richard, buried at Our Lady of Sorrows] and sisters Flora Rose and Laura Jennie. In the early 1860s the children were brought up by a grand-aunt in St Ives, Huntingdonshire whilst their parents were in India. In 1868 their father had to resign his appointment in India and return to UK. Because of his father’s lack of funds, Pauling and his brother had to leave school, aged 14 and 12 respectively. Between 1869 and 1875 Pauling became involved in railway work in UK.

In mid 1874 his father obtained an appointment with Cape Government Railways. Pauling’s grand uncle Henry Pauling also worked for Cape Railways and was by then Chief Engineer for Western Province Railways. In early 1875 Pauling and his brother, Harry, decided to follow to South Africa. Harry arrived in South Africa in June 1875, followed by George in November.

Pauling decided that there was money to be made from railway construction as a contractor and Pauling and Co Ltd was founded in 1877. By “the ripe old age of twenty four” [1878], he had made £15,000. Also in 1877, George married for the first time. This was to Annie Ayton who died only eight years later in 1885, when their two sons, George Henry and Richard William were seven and five respectively. Both sons are buried at Our Lady of Sorrows. Pauling returned to England in September 1887 where he married again in November to Edith Kate Halliwell. They had no children.  She died in March 1906 and is also buried at Our Lady of Sorrows.

George Pauling made his name and fortune in connection with the expansion of the railways throughout southern and central Africa under his great friend and confidant, Cecil Rhodes.  At the latter’s request, George Pauling accepted the portfolio of Mines and Public Works for Rhodesia and a member of the Executive Council, holding office from 1894-1896. Pauling’s brother, Harry, died in London in November 1897. This seemed to have badly affected Pauling. “Harry’s death ....was the hardest blow I have ever had. To each other we had been more than brothers. Our friendship amounted almost to a mutual devotion and from the days of our childhood never an angry word had passed between us”. 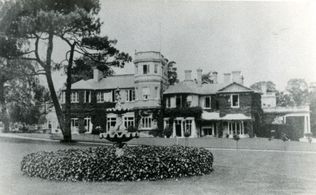 While in England during Harry’s illness Pauling determined to make a home for himself here. He looked at no end of properties within a distance of from twenty to thirty miles from London. One day Lawley [a life long contracting colleague], while home on a short holiday, told George that he had discovered the very place to suit him. Pauling was so tired of looking around and so busy with the firm’s business, that on Lawley’s recommendation and without having seen the place himself, he purchased a small estate at Effingham. This was The Lodge and surrounding land, including what is now the KGV playing fields. The house was then comparatively small but in his own words George “stupidly spent a large sum of money in adding to it and spoiling it.” 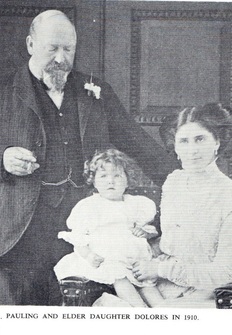 Following the death of his second wife Edith in March 1906, George Pauling married Dolores (Lola) Guibara,  youngest sister of his deceased brother’s wife Rita, in November that year. She is buried with Pauling at Our Lady of Sorrows. They had two daughters, Dolores Angela born in 1908 and Jane Josephine in 1912.

In 1912, George Pauling was granted the privilege of a Private Oratory in The Lodge by the then Pope, Pius X. Two dozen local Catholics worshipped there on Sundays and the Chapel became the nucleus of the present Roman Catholic parish.

George Pauling died of influenza, in the 1919 epidemic, aged 64 and his body was laid to rest in the cemetery beside the Church he had founded.  George Pauling was a “larger than life” character.  His obituary in the Times said of him:

“(he) was a very gifted and very lovable personality.  He combined immense physical strength with qualities of mind, of which exceptional commonsense, an unusual power of penetration and a keen sense of humour were the most remarkable. With them he was peculiarly well gifted to make his way in the new countries in which his work principally lay and he made full use”. 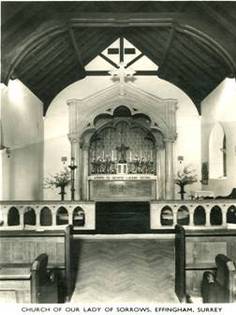 Our Lady of Sorrows

Begun in 1912, the Church was opened and consecrated by the Bishop of Southwark, Archbishop Amigo, on 8th October 1913.  The cost of the Church and the priest’s house was met in full by George Pauling.

The report in the Leatherhead Advertiser of 18th October 1913 states that “At eleven o’clock Pontifical High Mass was sung by Monsignor Prior, Judge of the Roman Rota [Mgr John Prior was Vice Rector of the Beda and Auditor of theRota] who was on a visit to England. Monsignor Prior was assisted by Father Ward (Lewisham), Father [Edward] Murnane (Bermondsey) and Father Freeland (Battersea). Other clergy present were Monsignor Brown (Vicar General of the Diocese of Southwark) [created Auxiliary Bishop of Southwark in 1924], Mgr Doubleday, Canon William Murnane (Camberwell) [Fr Edward Murnane's brother], Fr Louis Herlihy (formally of Bermondsey, now priest-in-charge of the new Effingham church), Fr Laurence (Cobham) and the Provincial of the Franciscans. A harmonised choir of priests sang the music of the service”.

“The sermon was preached by Canon Murnane on the following text from St John's Gospel, Ch1, Vs 38 & 39 : “Then Jesus turned and saw them following and saith unto them,'What seek ye?' They said unto him, ' Rabbi, where dwellest thou?' He saith unto them, 'Come and see'." After an eloquent discourse, Canon Murnane could not conclude without expressing the deepest gratitude of the Bishop of the Diocese, the clergy and the people to the donor of this beautiful church in which they were met. They were deeply thankful for this expression of piety on the part of the giver and it would be a great blessing in this country place to the membership of the Church around it.”

The style of the church is ‘Early English’ and the design, prepared by Mr Edward Bomer, closely follows the plan of a pre-Reformation Church.  The advisory architect was Mr C Hinsley and the builders were Messrs. Gaze of Walton and Kingston.  The Altar Canopy, now removed, was designed by Mr Bernard McAdam of Putney in the Italianesque style.

In 1919 a Pieta in Carrera marble was erected to the right of the Altar rails by the Pauling staff in memory of the founder. This is now in the cemetery. The Baptismal Font is pre-Reformation, originally from an Oxfordshire church but discovered during the First World War in a house at Henley-on-Thames.


In 1976 alterations were made to the Sanctuary to enable the Liturgical Services to be conducted in accordance with the rules laid down by the Second Vatican Council.  The Altar Canopy with its marble pillars was removed to make room for re-positioning the existing High Altar to the front of the Sanctuary to enable the Celebrant to face the congregation when celebrating the Mass and other Services.   The Tabernacle now rests on a six foot long Portland stone which is, in turn, supported by a single leg of stone taken from the base of the Pieta.  The Sanctuary is now in keeping with the ‘Early English’ design of the Church.  New lighting and heating systems were installed and the Church was redecorated. 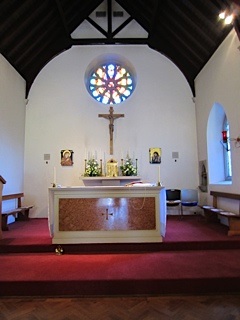 The Baptismal Register commenced on 6th December 1913 and the first entry was that of Walter Nicholls, a convert to Catholicism, and the baptism was conditional.  The first marriage took place in October 1917 when Lieutenant Philip Ryk Myburgh of Uckfield married Marjorie Esther Henderson.  The Confirmation Register starts on 11th Mary 1915 when Archbishop Amigo confirmed William Armstrong, Harold Everett, John Kelly, Walter Nicholls, Dolores Pauling and Emma Maria Delgado.  The first burial in the cemetery was that of Helen Christina Wray on 27th September 1915.

The Pauling Family Buried at Our Lady of Sorrows

Grave No 1 on the plan below is that of George Craig Pauling (1854-1919) himself, who is buried with his third wifeDolores (Lola) [Guibara] (1884-1938). Alongside in the same grave is his mother Jane Saunders Pauling (1834-1915). George Pauling and his mother are also remembered inside the church on the right hand side, George in the stained glass window at the front and his mother in a stone plaque nearby. George's first wife, Annie Ayton, who died in 1885, is not buried here but his second wife, Edith Halliwell, who died in 1906, is buried in Grave No 2. 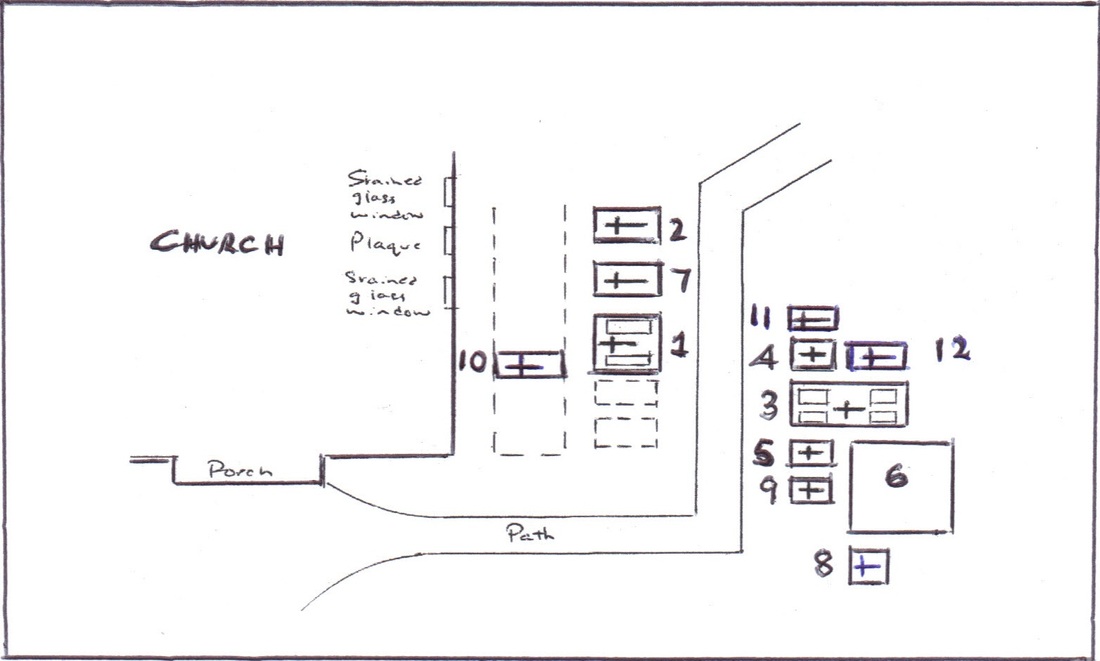 
There are no records of any children by George Pauling's second wife Edith Halliwell but he had two daughters by his third wife Dolores (Lola) Guibara.  The eldest of these, Dolores Angela [Coombs] (1908-1974) is buried together with her husband Richard Coombs (1896-1965) and their two children Dolores Anne (1931-1937) and Richard John (1933-1937) in Grave 6.  The two children both tragically died on the same day, 3rd May 1937, reputedly of Weils disease but this is now disputed.

George Pauling's brother Henry Richard Clarke (1857-1897), who went to work with George in South Africa and Rhodesia, also married a Guibara, Rita (1871-1935), an elder sister of George Pauling's third wife, Dolores.  They are buried in Grave 7, his wife being under the surname of her second husband, Hill Kelly. They had two sons and a daughter, the youngest son George Francis (1895-1918) being killed near Arras in the First World War.  He is commemorated in another stained glass window inside the church.

The tenth and last family grave is that of one of George Pauling’s nephews, one of his youngest sister Laura Jennie’s sons, George Henry Ayton Fowler (1901-1976) who is buried in Grave 10, together with his wife  Lilian May (1900-1993).

Other nearby graves are those of George Pauling’s great friend Ned Cleary  [Grave No 11] and his long serving manservant, Edward Delgado (d.1937) [Grave No 12].